This is the first time I’ve really been to the American Association of Geographers meeting. Last year it was held in Chicago, which is really close to Madison, and I was invited to speak at a session called “The View from the Anthropocene” organized by two great Geographers from the University of Connecticut, Kate Johnson and Megan Hill, but I had the kids & really only spent the morning there.  I’m pretty sure there was another reason as well, but I can’t remember what it was.

It was great to see Kate & Megan again this year, both of them are doing really cool stuff (check out their web pages), and it was really great to see that the momentum behind the original idea was enough to re-tool the session into the Symposium on Physical Geography at this year’s AAG meeting in San Francisco, with Anne Chin of UC-Denver on the organizing committee, and a host of fantastic speakers.

My own presentation in the session focused on the Anthropocene, and its role as both a boundary (whether you want to define it as an Epoch sensu stricto or as a philosophical concept – I think that Stanley Finney & Lucy Edward’s article in GSA Today nicely lays out the arguments) and a lens.  The second part of that equation (the lens) is a more diffuse point, but my argument is that the major changes we see in the earth system can impact our ability to build models of the past using modern analogues, whether those be climatic, or biological.  I show this using pollen and vegetation records from the Midwest, and make the connection to future projections with the example laid out in Matthes et al. (2015), where we show that the pre-industrial climate niche of plant functional types used in GCMs as part of the CMIP5 intercomparison are not better than random when compared to actual “pre-settlement” vegetation in the northeastern United States.

But I really want to talk about a single slide in my talk.  In the early part of my talk I use this slide: 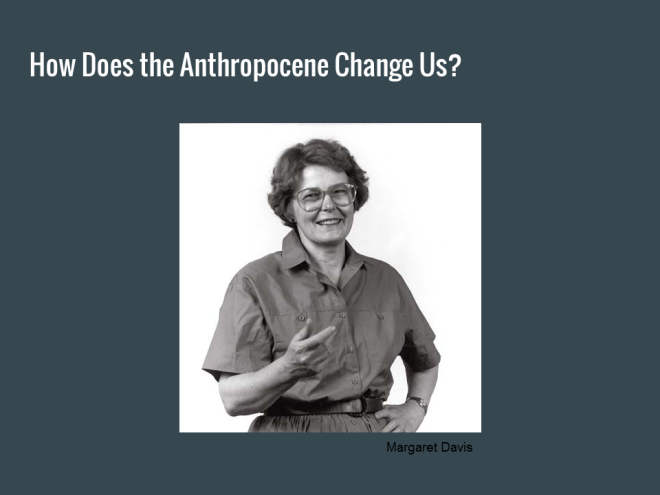 This is Margaret Davis, one of the most important paleoecologists in North America, past-president of the ESA [PDF], and, importantly, a scientists who thought deeply about our past, our present and our future.  There’s no doubt she should be on the slide.  She is a critical piece of our cultural heritage as scientists, an because of her research, is uniquely well suited to show up in a slide focusing on the Anthropocene.

Personal actions should be the manifestation of one’s political beliefs, but so much of our day to day life passes by without contemplation.  Susanne Moser, later in my session, talked about the psychological change necessary to bring society  around to the task of reducing CO2, of turning around the Anthropocene, or surviving it, and I think that the un-examined life is a critical part of the problem.  If we fail to take account of how our choices affect others, or affect society then we are going to confront an ugly future.

Everything is a choice, and the choices we make should reflect the world we want for ourselves and for the next generations. If our choices go un-examined then we wind up with the status quo.  We wind up with unbalanced panels, continued declines in under-represented minority participation in the physical sciences, and an erosion of our public institutions.

This post is maybe self-serving, but it shouldn’t have to be.  We shouldn’t have to look to people like DN Lee, the authors of Tenure She Wrote, Chanda Prescod-Weinstein, Terry McGlynn, Margaret Kosmala, Oliver Keyes, Jacquelyn Gill and so many others who advocate for change within the academic system, often penalizing themselves in the process.  We should be able to look to ourselves.